wind & turbulence are not your friends, in the end
they want to undo you, subdue you, make the ride
a push of stream against bottom, hold the bottom
down, the sound of push & pull, chains

that guard your humanity, you are more to me than any simple machine.

Time
works, clocks
strike, spokes speak the language of hitting it hard, large
adventures where heroes break indentured servitude, & grease is crude
oil that boils to burn all that we’ve learned from these fools.

Once upon an unspecified rythmic time I rhymed
myself against a tree & see the scar it left for me?  We
are one, solid roots that shoot to earth & hold the gold
of their nutrition.  Fruition comes from grinding into dirt

is your underneath, the bicycle
takes you to the otherside, slides
over the dirt path, hard grass, crashes & still
fits between your legs.

In essence it is adolescent innocence that we sense as the whirr & click, stick
shift over the deraileur & we gun down the hills made of years
when we yearn for our story to be old, told
to children on laps before they strap on the helmet & wobble
into their freedom. I see them

cruise down the streets in packs, attack the pavement & curbs
urge their machines to be closer to their flight
than all the might just a mind can muster,  ‘trust her’

they are whispering, ‘trust her’ we are gathering, rush
into the oncoming traffic & swerve
with the pack & breathe the music of the muse who loses it

the bicycle replaces belief, the bicycle
is your underneath, sneaks across paths & cuts
the ruts of old train tracks, cuts back

a bird, a line of words, more verb than any thumping noun
could replace – space

Lunging
down & through the town the gear cables tell tales
as the veins they are course blood
back to the heart, art, starting apart the air & your lungs
make love & sigh relief, the sighing relief

of shifters shifting lovers under the covers of heat & complete
exertion.

The bicycle fought for its independence, wholly warred
against the tight fisted, rolled out the factories as those with greed
also tried to stultify its nobility.  One wheel big, frame too tight, light
on rim, trim down the fat, eject this & keep that, over time it
rhymed itself to perfection as the priests of pedal & frame fought
the fame devils of engine who were gaining speed.
Cities carved streets from paths & pushed you to the edge of extinction
but in an blink them bold pioneers of gears & steel wielded the power
of subtle beauty & the bicycle

replaced belief, & the bicycle
became our underneath, the bicycle
took its seat in the halls of simple power & we ride

to the unknown
with muscles blown to balloons by wind & turbulence

with reality of spirit made flesh. 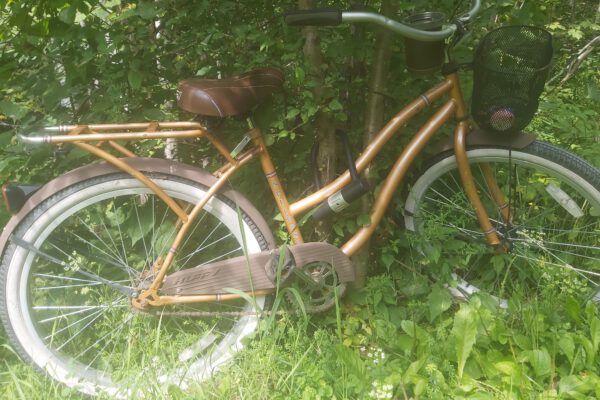 I, like this bike, await its owner to return from whatever battle, or wait for a tree to sprout under it and carry it toward the heavens.