I’m being very sincere when I say this: that while most people probably can ride a bike and that I am fairly convinced that a lot of humanity’s problems could fairly handily be solved if more people spent more time riding and thinking about bikes, most folks who attempt to wax about them come up fairly dry and short. I also sincere about this: I’m usure why this is. Our local Chapters though, seeing the total lack of quality books out there about bikes, recently ditched their cycling section which blows my mind as much as it blows chunks – seriously, there is a boxing section, a shelf for golf, another for hockey and baseball and basketball. For Christ’s sake there’s even a ‘bushcraft’ section, whatever the hell that is. It’s not like I blame them though – the cycling books were just a jumble of pseudo-science textbooks about watts and the odd ego stroking tome about someone’s immensely aristocratic and self-indulgent blast across Patagonia.

Here’s the thing though, both Youtube and the conversations that my pals and I get into are chalk full of cool, real, interesting, human stories where the bicycle is sometimes the main character and where just as often as not the bike is the vehicle of the main character, who sometimes is the person telling the story, but certainly not always. I’m unsure why books are so hard to write about something so simple – maybe it’s because they are just so magically wonderful that we find it difficult to get it into words without feeling silly; I tend to think though that it’s because we feel that if we aren’t talking “serious shit” about our bikes, then we are giving in to that notion that they are just toys.  The West is full of dichotomy problems. I personally don’t care if it’s silly, or childish – I know, deep in the bones, that biking is fun and serious and that there’s no trouble there.  None at all.

So here’s the deal, for the next six weeks I’m going to write a piece to be published every Saturday about bikes, why they’re cool, how they are important, and some lessons I’ve learned from them.  Believe me – my life has been a bit of a hot mess by times and bikes, the people I’ve met by riding bikes, and the simple things that riding (and crashing) have taught me have been the foundation for me becoming the ok dude I am today. 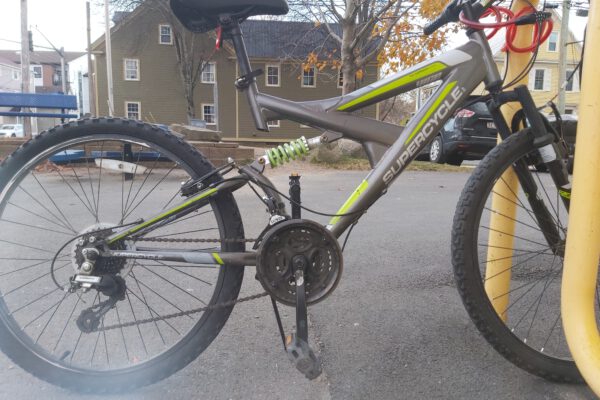 In grade 4, M moved here from Saudi Arabia. His dad bought him a bike when he got here, but the brake didn’t work so well.