Recently I got back to work a  er lunch unbelievably dirty. My face was splattered with mud, my arms and legs were completely covered and straight up my butt, like a big fuzzy squirrel’s tail, was red muck and gravel, the kind that the cleaning lady in the office hates and the kind that clearly says, ‘I spent that precious hour absolutely bombing the woodlot on my bike.’ What can I say, it doesn’t just make me feel like a kid, it reminds me that the best part of me is still a kid, still capable of hours of continuous effort, still wantonly splashing through puddles at top speed, still daring hills and challenging jumps to rip either my back or my bike to pieces. Very few folks get it, and most of them are under 12.

The other day we were out for a rip in the woods — he biking and me running — when we passed through a gravel pit. “Wanna stop and play here for a minute?” he asked. Sure, says I, that sounds good. So he pedaled up to the top and stopped — I whipped by him and then flew down the hill, taking high jumps by tucking myfeet up under me and recoiling into the landings, protecting all my soft bits and letting the larger muscles take the brunt. My son, seeing what I was up to, got off his bike and came down after me, arms in the air like he might lift right off . After an hour or so of running up and down the hills we left  and he said “I think I can bike it next time.”

See, the thing we forget is that while we are righteously endowed with a powerful fearlessness when we’re kids, we lose that when we get older and become more ‘reasonable.’ Just as unfortunately, is that we forget that maybe, just maybe, it’s not just our kids that have to take lessons to get good at things. I mean really — we take lessons to learn how to swim, to skate, to dance, to paint, to scrapbook! And yet, somehow, we figure that we should, miraculously, just KNOW how to bike. Partly I think that’s the fault of a society that hinges the very act of riding itself on that age old weird-ism ‘you never forget how to ride a bike’ and while that’s true of the magic formula ‘balance over inertia equals freedom,’ we do ourselves an incredible disservice by thinking that that’s that.

I can’t say I blame us though — the spectre of cycling athleticism (not to mention the FASHION that goes with both ends of the professional cyclist/ hipster spectrum) is enough to leave anyone with the feeling that nope, can’t do, just gonna ride the thing on the path once a week, when it’s nice, with one friend, and be done with it.

And that’s not even talking about traffic. Or The Hill.

But the kids know — they know that hills only exist in the mind, that if you don’t have enough power to get up it (yet!), then you get off and walk for a bit — hell’s bells, the thing carries you enough, it’s okay to push it for bit. They also know traffic is okay if you respect it and understand that cars don’t give a shit about you and that, ultimately, you have way more pick-up from a dead stop and maneuverability than those clunky hunks of metal and fossil fuels anyway. And the kids know that if the weather looks bad, you add a layer that you can peel off later when you’re ready to lock up your steed and head inside.

Lessons off end though, right? There’s something terribly ‘kid-ish’ about having to go to class to learn how to do something as rudimentary, something as intimately HUMAN as riding a bike. Understandable. Perhaps, then, we might want to consider it more of an apprenticeship or mentoring — would that make us feel better in asking for a little help? Would that assuage our sense of self-worth?

Yeah, dealing with adults is impossible, requiring such tact and sensitivity to people’s fragile feelings and egos that it’s hardly worth it. Kids, on the other hand…

An article recently went around wondering aloud about giving adults lessons in commuting and ‘street sense’ and while I agree that it’s a good idea, fighting against the general malaise of grown-ups, their fear of trying new things (and not being 100 percent perfect right off the bat), their distrust of Lycra as much as beards and skinny jeans, their Eeyore-ish attitude towards both the hill and the weather (oh, that hill always happens to ME), and their overall lack of interest is just too much.

On the flipside, however, it seems to me that that’s putting the cart before the horse, as it were, that getting kids on bikes, teaching them how to ride smart and hard and fast and confidently, not just for fun but for travel and adventure, is exactly the way to get more people on bikes. Seriously, if you start young and it becomes a THING for you, if you are 10 or 11 years old and you can identify as a BIKER, it’s a powerful thing. And that’s really what this revolution is about, isn’t it? Isn’t it about encouraging folks to be healthier, stronger, more independent, more ecological and community minded? Isn’t this about changing the world?

Maybe. Or maybe, just maybe, it’s about riding bikes. Maybe we don’t need lessons per se, but we do need a generation that grows up seeing their bicycle as part utility, part sexy and a whole lot of unstoppability. Maybe by getting kids riding their bikes (and thereby guilting their folks into doing the same) a whole lot of problems will be taken down in one fell swoop, a regular ol’ panacea for obesity, fossil fuel dependence, urban sprawl, etc. Maybe it’s just about riding bikes and in the fall out tons of good serendipitous things will happen. Imagine that — it’s hard to, isn’t it? Almost beyond our wildest dreams that something utterly NEW could happen.

Kind of like in 1817 when one Karl Christian Ludwig Drais von Sauerbronn put one wheel in front of another and, for the first time in human history, someone came upon the astounding revelation that a human being could balance like that and move forward at the same time. Fast, even elegantly one might say. Revolutionary. What a kidder that guy must have been; betcha anything the first thing he tried to do, once he got it going, was cruise by some lady’s house, call her name, and try to ride it with no hands. 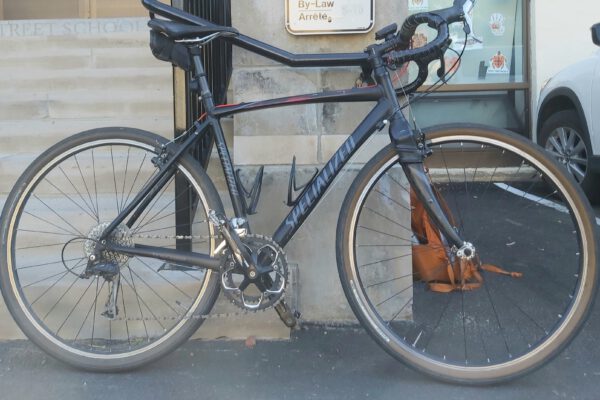 “Man, all the exploring we’ve done together – it has changed my life.”