It’s Monday at 8:30 a.m. and I’m standing at the front of my first-year English Lit class; we’ve been at this for a few months now and so it’s pretty informal. Over the weekend I’ve had them read Edgar Allan Poe’s story ‘A Tell-Tale Heart’, a short, mind-bending first-person narrative about… well, that’s the question, isn’t it? I ask if anyone would like to summarize the story for us–what they don’t know is that it’s a trap; not a trap that I’ve set, I teach class with my sleeves rolled up so everyone can see that there’s nothing in there, but one that Poe himself put in there.

If you’ve read the story, maybe you can already see it coming–a brave or otherwise just talkative student pipes up. “It’s about a crazy guy who kills an old man, chops him up, puts him under the floorboards, and then freaks out and confesses to the cops that he did it after he thinks he hears the heart beating.” Seems right enough, right?

But why do we assume so much? First, why think that the narrator is ‘crazy’? From the first line, we are implored to NOT think that: “TRUE! –nervous –very, very dreadfully nervous I had been and am; but why will you say that I am mad?” Uh, because he killed an old man and then cut him up? Hmmm–okay, then why do you believe that this crime took place at all? Do you usually believe what ‘crazy’ people tell you?

And while we’re at it, why do you think the narrator is a man? Find me ONE place where you can conclusively prove the gender is EITHER. Bet you can’t.

You see the trap–you can’t prove it at all and the even validity of the story itself is definitely questionable. As a matter of fact, the more you dig in, the less you learn about the narrator or the story and the more you learn about yourself, because just like all truly excellent and insightful works, we don’t just read it, it reads US. That’s art; and what’s more, that’s not just art, that’s any human activity that brings you to the point of self-awareness through unraveling your sense of certainty, well-being, security. Being okay there, knowing that deep down you can live with doubt in the face of challenge, is called coping.

Last summer, at the Brookvale 50k, I met Tyler Heggie. If you follow the on-going debate surrounding kids and ultrarunning, you may know him too–he’s competed in a few distance races, run a handful of solid marathons, and, most remarkably, ran the length of Prince Edward Island on Canada’s east coast the summer before last in seven days. That’s 273 kilometers, a week’s worth of marathons. He was 11.

You can, I’m sure, just hear the ire that this raised. It was ire that had a hard time getting any purchase though–the amicable and very talkative Heggie was all over the media, his wiry and tanned self seeming to writhe with happiness as he talked about his run, all the great people who were there with him (lots went along for a bit, no one made it the whole way with him), and the cause that he felt so passionate about–raising money and awareness for MS, a disease that his mother suffers from. The naysayers didn’t stand a chance.

And really, neither does anyone who tries to rain on his ultra parade–as I witnessed at Brookvale, if you step up to him and try to give him one the “aren’t you a little short/young to be running 50k” lines, be ready for the seemingly endless and breathless rants that he’s capable of. He talks the way he runs–with sure and steady tenacity. To say that you’ll get an earfull is an understatement. But don’t get me wrong, he’s not angry; far from it, he LOVES to talk about running and being outside and pretty much anything else that comes to mind.

A couple of months later, in October, I met Tyler again–this time at the Beat to Snot 28k on the Wentworth Ski Hill in Nova Scotia. This race boasts being one of the toughest races around, with over 3,500 meters of gain and the following posted on their website: “Trekking poles are recommended for race day. Lots of hill work (hiking up and running down) for training would be a very wise move as this course’s intent is to be very difficult… and you will be beat to snot in the end!” Strong words that ended up being 100% true.

At the start line, about 20 of us toed up–Tyler was already talking at 80 miles an hour. He was psyched, he had only had a couple of hours sleep having arrived from Prince Edward Island (PEI) late the night before, and he wasn’t sure if this was such good idea as, he said with an impish laugh, “I have a cross-country race tomorrow!”

When the horn blew, as always happens, we took off at full speed–which, as it turns out, was extremely short lived as we hit the first steep ascent after little more than a 50-meter sprint. Jamming it into low gear all the banter dropped off and the laborious breathing and under-breath swearing at the race director started… for all of us except Tyler, who was busily chatting away about, well, about whatever was going through his hornet’s nest of a mind.

Tyler’s strength, if not his speed, is already legendary. As I overheard at Brookvale when an older gent asked one of Tyler’s young friends, who had come along for the fun, how he got started, Tyler started running cross country in elementary school and then “just kind of kept going”. Straight across PEI apparently. And despite his detractors, shows no signs of stopping any time soon. In a manner of speaking…

The Wentworth climbs were utterly heinous–I know it’s sort of an overused term, but the dictionary, honestly, should have a photo of the central hill we grunted up to illustrate the definition that reads “utterly odious, wicked, monstrous, abominable; as in ‘a battery of heinous crimes’.” It was all that, and as the sweat was literally rolling off the end of my nose in streams and I focused on counting my steps, I briefly wondered how Tyler was doing, what he was yammering on about, why he would come here, with all of us at least twice his age and size, the day before a cross-country meet with his peers.

Of course, the answer to that last question was maybe a bit too obvious for my exhaustion-addled brain to handle–he was here for exactly the same reasons we were, regardless of size and age; that is, to test ourselves against this mountain, to be in nature, to understand the meaning of life through the exercising of effort. To survive and in so doing come to know ourselves a little better. As Alex Honnold said of his and Cedar Wright’s Sufferfest, we do this to build some character “even if in the middle of it, it really sucked”.  In crystal-clear terms, we were there to cope.

At the finish line, utterly spent, I wobbled over to the RD and asked how Tyler was doing. “Oh, he left.” What? I said, did he finish ahead of me? No, he had dropped after the first loop. Oh man, is he okay?  The RD smiled, “for sure, he was just tired and had to get home and finish his homework so he could rest up for the race tomorrow.” Knowing Tyler, he had probably relayed all that information in a matter of moments while he stuffed a few bananas into his face and packed up his stuff for the drive home.

Tyler’s story, in a time of rampant youth anxiety and ADHD and cutting and bullying and low self-esteem and pharmaceutical solutions to what often appear to be either environmental or social problems, is important for this simple reason: it’s not about whether or not kids should be running ultras or not, it’s about how they might learn to cope through extraordinary physical and emotional effort. Tyler’s example is an awesome one, not just because he can run amazing distances while chatting away like a granny over tea, but because, when the chips were against him, he knew what to do. If ever I have seen one, that was a noble DNF. “Gotta’ get to my homework and have a good night’s rest before I kick some serious butt tomorrow”–how much more legit do you want than that?

Like in Poe’s short story of the macabre, we learn much more about ourselves on the long and difficult run than we do about the run itself. Ask anyone who’s finished a six-hour-or-more effort what they are left with an they will almost undoubtedly regale you with all the manifest ways that they solved the world’s problems, but as for the terrain itself? “It was beautiful.”

It’s a strange thing to confess, but when I get to the point where I consider myself to be an accomplished distance runner, I hope to be just like Tyler Heggie–solid, present, dedicated, focussd, and in possession of all the tools necessary to plunge headlong into the unknown and come out smelling like sweet PEI canola fields. 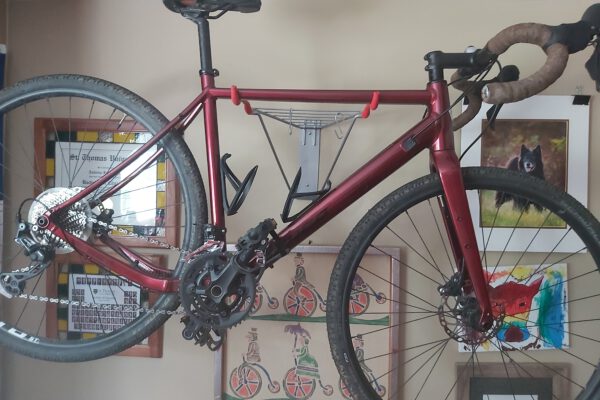 “This is the bike I’ve always wanted; it’s light and it’s fast and it’s beautiful.”