I was planning to run a race over a mountain and then ride a 75-kilometer gravel grinder this coming weekend. I hadn’t trained one little bit; I know that sounds crazy, but it felt like the most sane thing I’d done for some time. See, a month and a half ago my sister died and then work for the season ended (I’m a seasonal/sessional part-time prof) and then I wiped out on my bike and then I pulled a hamstring.

That makes me seasoned and strung and shocked and… well, sitting around has never been my thing. Ever.

Don’t get me wrong–man, I tried to train. I ran the distances and clawed at the hills, pounded the quads, cranked up the speed, and dutifully did my back-to-backs. I nursed the hamstring, went to the physio, iced, didn’t ice, stretched and rolled and strengthened. I talked with family about my sister. I set my sights on summer projects and put some hot irons in the fire.

And then last week the wheels came off. Funny expression, but I get it now–it’s the feeling of total awe and utter surprise you get when you think you’re cruising along and everything is humming together and then the one thing you least expect — the wheels come off! — happens and BAM! You skid to a stop, dead in the water.

The training felt awful. No need to psychologize, wax poetic, or run the numbers–it just felt awful. Fast times? Whatever. Big hill rush? So what. Another hundred-plus week? Meh. I never say ‘meh’! I knew something was up. I needed to check my temperature, have a look-see under the hood.

See, I love to run, so how could this happen? It felt impossible.

Muhammad Ali, fly poet of all athleticism, once said “impossible is nothing… impossible is not a statement, it’s a dare.” It’s a challenge that rings so true it can’t be unheard. Like the audacious George Mallory quipped when the newspaperman asked him why in the world he would ever want to climb Everest, an impossibility taunts us until we attempt it, just “because it’s there.”

And so, impossible as it might have seemed, I didn’t want to run. I was hurt, inside and out, but of the many things this gig as an endurance athlete has taught me, adaptability is the key to long-term success, to making it. As Harriette Thompson (aged 92) proved on June 1st by becoming the oldest woman to finish a marathon, or Bill Dobson who on March 1st tried to set the new world record for the 50k distance in the 80-85-year-old category and, as the New York Times reported, wiped our twice, then a third time and then crawled across the finish line and missing the record by eight seconds. You can bet he’ll be back next year. For that matter, as Scott Jurek is proving right now on the Appalachian Trail. Again, as our man Muhammad (“Say my name!”) Ali roared, “I hated every minute of training, but I said, ‘Don’t quit.’ Suffer now and live the rest of your life as a champion.” Until life and limb are threatened in a very real way, quitting just isn’t an option. As Annie Dillard, American writer of systems eco and belief, said of being faced with the utter absurdity of life, the first thing we have to do is realize that “we cannot do nothing.”

When I was 13 or 14 years old and living in the sticks, my friends and I rode our bikes everywhere. During the summer we would meet up early, our 10 speeds oiled and blood vessels lubed with Captain Crunch, backpacks full of whatever we could loot from the cupboards on the fly, and bicycle miles and miles of endless road. I have always, as someone once said, only been interested in hanging out with “wild people doing wild things in wild places.”

The bike has always gotten me out of toughs jams, has been the perennial emblem of liberation. When the bullies gave chase, it was the supreme getaway vehicle (never caught me on that thing, not once); when my friends weren’t around and the only other choice on a Saturday was chores, down the road we rode fast; and when twice my whip was snatched from me, once from the fire escape outside my window (buggers even left the snapped lock behind) and once from the back of my car in broad daylight in the grocery store parking lot (she was a beaut, but I felt so bad for someone so desperate to think that was their best option to fetch some quick cash), my freedom felt stolen, too.

I’ve ridden all kinds of bikes, each one a particular change in perspective: that amazing ten speed when I was a kid that I hoped would propel me out of the country with its sleek urbanity, a black Norco hybrid that I plastered with Bad Religion and Rancid stickers when adulthood seemed to be encroaching on me a little too fast, a pink and neon green Gary Fisher that seemed to ooze of Red Hot Chili Peppers bass lines, a hybrid duly dubbed Little Miss Marin the Mountain Destroyer that would finally set me straight. These days, I ride a Minnesota Framed 1.0 Fatbike (white with sweet tricked-out orange rims) and a gunmetal green Cannondale 29er named Adderly (you figure it out). These two beasts get me everywhere and I ride them year round both for fun and to get where I’m going, which is no mean feat given the fact that I live in the Arctic vortex of the Atlantic northeast in Canada, where winter last year, for example, started in November and by mid-April we were wondering if the woods would be clear of snow by June. These bikes are more to me than often seems sensible, but their utility and aesthetics both stem from their mechanistic simplicity (can you repair your four-wheeled gas guzzler yourself? I sure as hell can’t.) and their importance as objects of liberation, rebellion, and hope for a better future. As H.G. Wells once said in a moment of uncharacteristic optimism: “when I see an adult on a bicycle, I no longer despair for the future of the human race.” Our man the NYC Bike Snob likes that one too, and this probably because he knows perfectly well how hard it is to make it over the bridge from being a hopped up kid on Captain Crunch killing the miles on a Saturday afternoon to a grown up who still finds some tangible happiness in the strength, flexibility, and real freedom of range and motion that a bicycle gives you. The Snob says that “you should treat your bicycle like a washing machine — you should constantly subject it to filth and sweat.” And why not? Isn’t that, along with rain and trees and high fives and fresh fruit, the stuff of life?

Climber and all around hard ass Will Gadd says that as an athlete your job is simple–keep moving. Every day. And if something hurts, do something else. This living thing isn’t static any more than it’s for wimps; it’s about adjustment, ephemera, “fluid movement,” as Christopher McDougall says, “over rugged terrain,” to which the Snob adds that “this initiation involves physical pain. Yes, in order to liberate yourself from the psychic pain of being alive you will have to experience some physical discomfort. Much of it will disappear but some of it will remain. The good news is that you will come to embrace and even enjoy that discomfort… it’s better to feel cold than it is to feel like cattle. In fact, sometimes it can feel great to be cold.”

This past weekend I had planned to run over a mountain, but life got in the way. The wheels came off, I hit the ground, and the blaring reality of our physical limits and mortality and all the rest roughed me up. The impossible happened and life dared me to do something about it–like a big bully it got right up in my grill, poked me in the chest and said, what are you gonna do about it? It was clear, at least, that I could not do nothing. So I rode my bike. Hard. Through the mountains and into the countryside and toward my past. I let the machine, so beautiful and powerful and intelligent, take me into the heart of the world. Buddhist nun and former elementary school teacher Pema Chodron said that “the trick is to keep exploring and not bail out,” regardless of how frightening or weird it might get. We cannot do nothing. 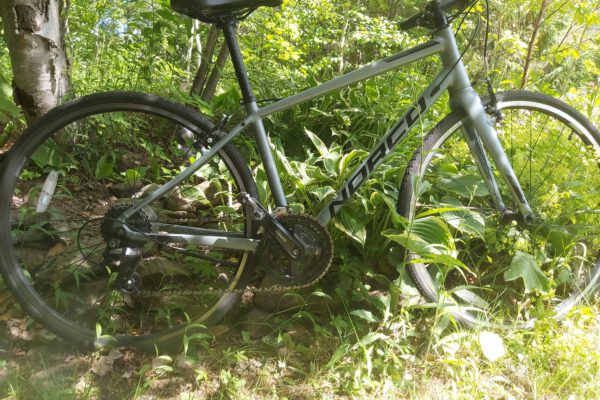 “She never breaks down, she goes fast, she takes me where I need to go.”