Working on a PhD is a soul-sucking, utterly disempowering process. At least for me it was. From beginning to crash-and-burn, throw-my-arms-in-the-air ending it was nothing short of an absolute write off. A money hole. A pain in the posterior. A one-way ticket to self-loathing, and a clever rouse on the part of the doctoral program to ensure a steady income for them. A sham.

That being said, even if itʼs relative value and heartache potential canʼt either be underestimated, a point did come where I realized two critical things: one, that I didnʼt really need no stinkinʼ PhD to be a pretty good teacher and, two, there arenʼt any jobs anyway so I had might as well cut my losses and just get on with this work of living, that not only could I continue to teach without it, but that research and writing could also continue. What a surprise!

Theory and practice are not so different; they form a gestalt wherein a person draws from interlaced inspirations, daily interactions, revelations and ideas in order to construct a way to be in this big olʼ world. In his essay ʻMind weedsʼ, Zen monk and scholar Shunryu Suzuki has this to say about the garbage we carry around: We say, ʻPulling out the weeds gives nourishment to the plantʼ. We pull the weeds and bury them next to the plant to give it nourishment. So even though you have some difficulty in your practice, even though you have some waves when you are sitting [read, perhaps: teaching], these waves themselves will help you. So you should not be bothered by your mind. You should rather be grateful for the weeds, because eventually they will enrich your practice.

Easier said than done. Easier said than done, but rewarding too. We all struggle with our teaching practice; that is, with the ideas and theories we have and how they translate into the classroom. My PhD experience, while largely painful, reminded me everyday that every student struggles uphill and that what might seem obvious to me is mind blowing to them (and as such will take a while to settle in) at best and downright baffling and alienating at worst. As I worked against my own frustrations though, I started to develop more compassion for my students, and the weeds that I was pulling out (in fighting with my thesis, my committee, myself, and the relative value of my degree at all) I started to plant beside my teaching practice. I worked with my studentsʼ difficulties with the material instead of just plowing forward, I listened intently to the ʻmistakesʼ they were making in their papers and changed my approaches to how I delivered the material, seeking to find ways to make it relevant to their world and development as individuals as well as scholars. My difficulties translated into their successes. As Henry Rollins, spoken word performer and punk rock icon, says: “knowledge minus mileage equals bullshit.” I was starting to learn what it really meant to be a teacher, to be a person given the authority to speak daily with youth about the things that matter — hard questions about existence, difficult realities concerning history, unsettling revelations and destabilizing critiques.

My ʻauthorityʼ in the classroom has radically altered in the years that Iʼve been in there. Instead of seeing it as a transfer of knowledge, I tend to look on it as a working relationship, as a dialogue between myself and the students where my role is to keep the ball rolling. Interpretation of text is a slippery thing as we, as a culture, continually move: the written word may be stable, but the audience as target is in constant flux. So too is the teacher, the one who holds the text and aims.

In another of his essays, ʻFreedom from everythingʼ, Suzuki says, quoting Dogen, “ʻHitting the mark is the result of ninety-nine failures.ʼ The last arrow hit the mark, but only after ninety-nine failures. So failure is actually okay. Each time you shoot, shoot with confidence.” Last April I packed my PhD in, not without some degree of bitterness. After letting that frustration sit for a bit, I planted it back in the ground; after all, I wouldnʼt be spending so much money on something that only seemed to bring me misery, and I could put all of my energies back into teaching, writing, and raising my children. All Iʼve ever wanted was to be a teacher, and I was already doing that. In addition, I had learned a critical lesson in the process about being a teacher: the importance of compassion and how that differs from superficial concern or sympathy. My failure, the weeds of my mind, brought about confidence and growth. I now know that simply encouraging students to continue with their education, if they clearly show passion for something else, is not the right thing to do, that they must, to quote Joseph Campbell, learn ʻto follow their bliss.ʼ More than that, I came to see in my everyday practice that learning how to think, to write, to read and to speak are the real gifts of a liberal arts education and that, as a result, my role in the classroom is to slow down, to take the students into consideration at every turn, to teach them how to turn their perceived failures into opportunities for growth and to ʻshoot with confidenceʼ.

This afternoon I walked down the hall and a second year student who I taught last year said “Hi Doctor Titus.” No, no doctor for me, I said. “Oh just Titus, right?” she said, “well, you fixed me up pretty good.” Failure, like coincidence, is just a matter of perspective it seems. 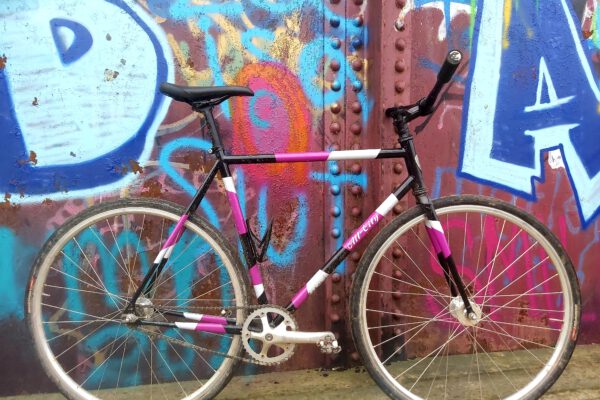 “I’ve never liked pink, but when I got it… like, just look at it! It’s SO SICK! I can’t imagine ever getting rid of it. It’s just the best bike.”